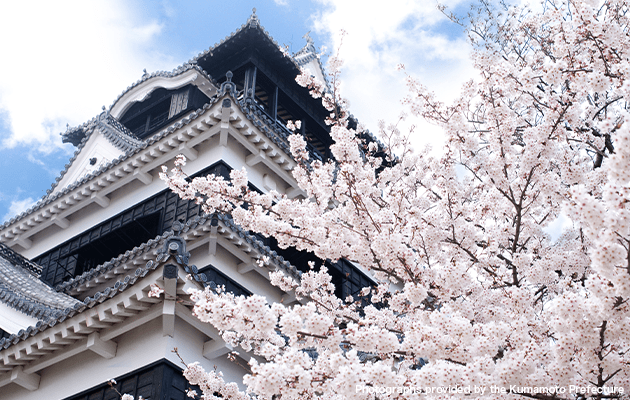 Kumamoto Castle was built over a period off seven years by Kato Kiyomasa, a famous Japanese military commander. This magnificent castle is one of the "Three Famous Castles of Japan," with three towers on the expansive grounds (circumference: approximately 5.3 kilometers) together with a large number of turrets and castle gates. *Seriously damaged during the Kumamoto Earthquake of 2016, many parts of the castle are currently inaccessible. Visitors can view the Ninomaru Square and Kato Jinja Shrine, from which the castle keep and turrets can also be seen. 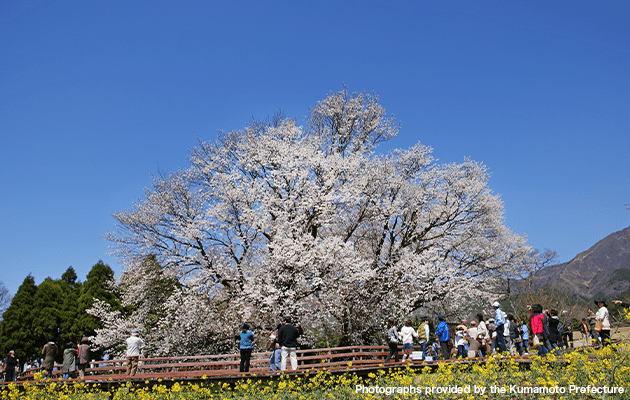 The huge 400 year-old 14 meter high cherry tree stands in the field of rapeseed. The cherry blossoms and rapeseed bloom at more or the same time, a sight well worth seeing with the bright yellow of the rapeseed forming a carpet below the beautiful cherry blossoms. 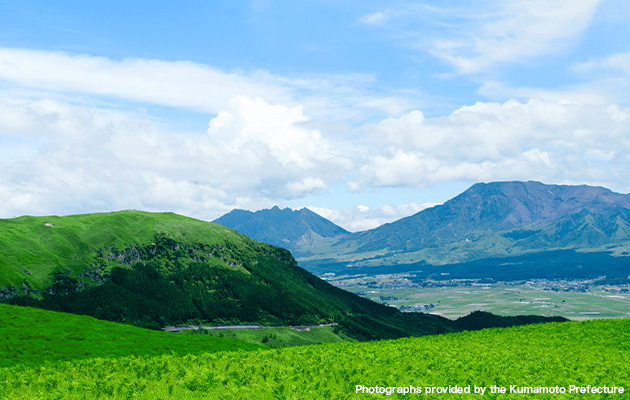 This is thee best spot for viewing Mount Aso (The Aso Five Peaks), the alignment of the five peaks of which resemble Shakayamuni, the historical Buddha, giving rise to the name "Reclining Buddha." 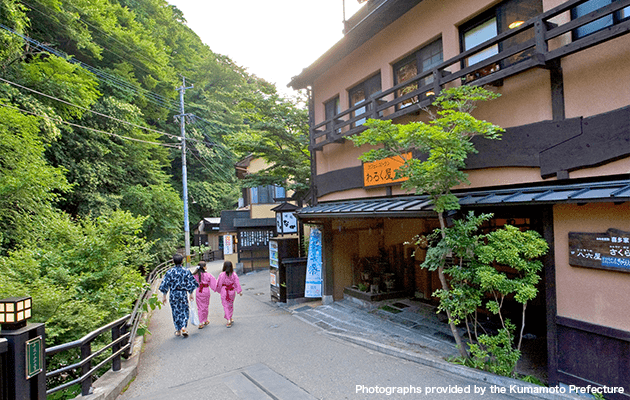 A number of scenic hot spring resorts, Japanese-style Ryokan inns and hotels are located in the depths of the rich natural environment of the woodlands of Mount Aso. Visitors purchasing a wooden hot spring admission token can enjoy all kinds of outdoor baths at their leisure. 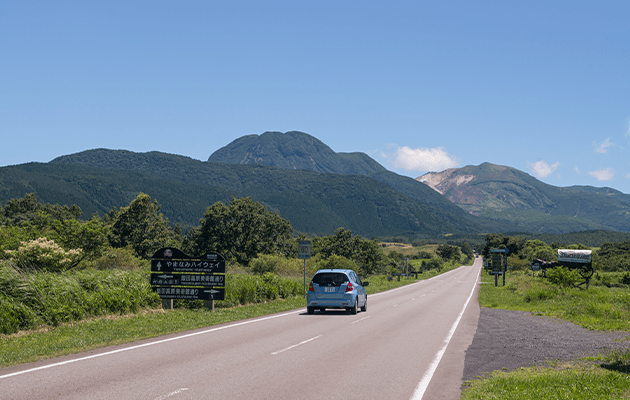 Driving course from Oguni-machi in Aso-gun, where the Kurokawa hot spring resort is located, to Yufuin. One of the 100 Famous Roads of Japan, this road gives a view of the magnificent Kuju Mountain Range. 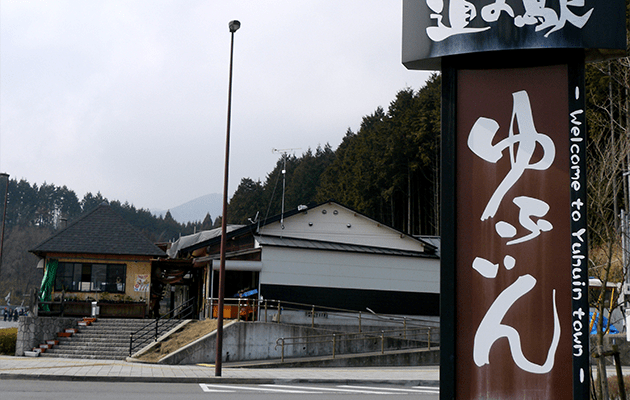 Located straight ahead when exiting the Yufuin IC, the convenient roadside station gives visitors a chance to take a break from driving, shop at the produce corner where local products are available, and collect information on sightseeing in Yufuin from tourism information guide staff.

Row of cherry trees along the Oita River, Yufuin 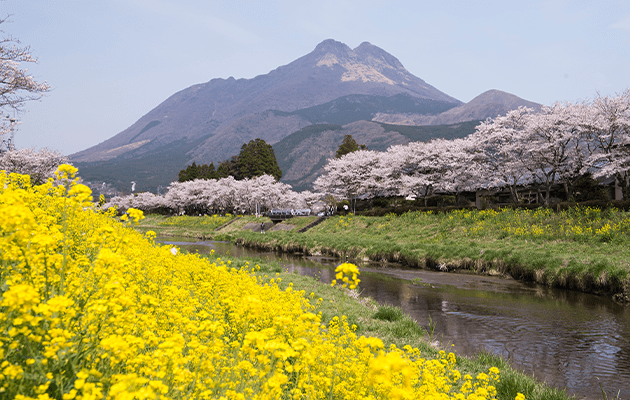 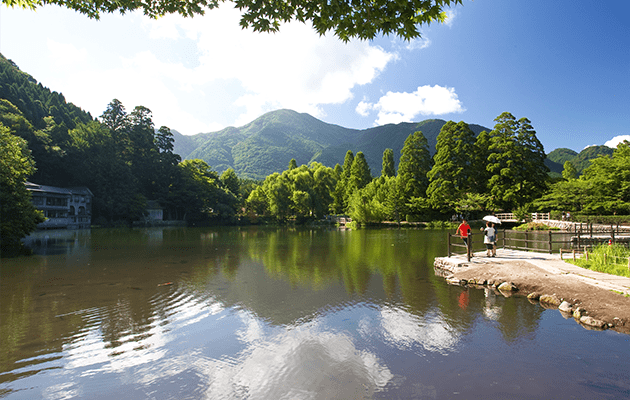 One of the most popular sightseeing spots in Yufuin. The scales of the fish swimming in the lake reflecting the setting sun glitter with a golden color, hence the name [Lake Kinrin (golden fish scales)]. 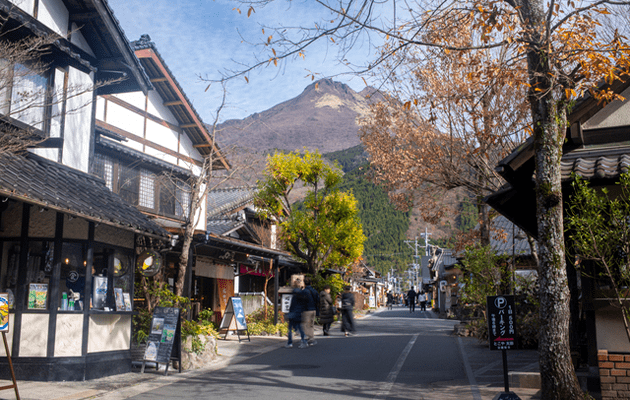 On [Yunotsubo Street] that runs from Lake Kinrin to Yufuin Station, visitors will find rows of souvenir shops selling specialties of Oita and eating and drinking establishments serving local gourmet cuisine. Looking around the numerous art museums that can be found here and there in Yufuin is also recommended. 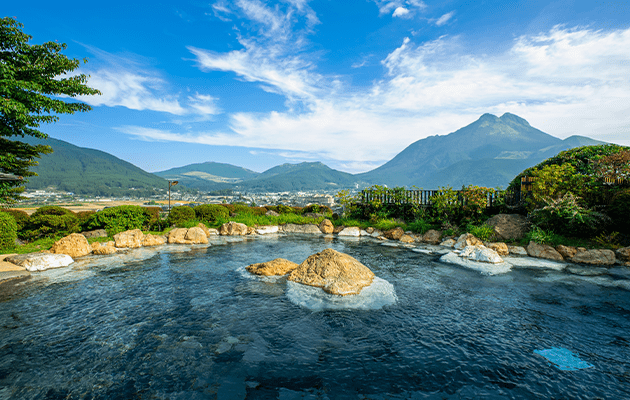 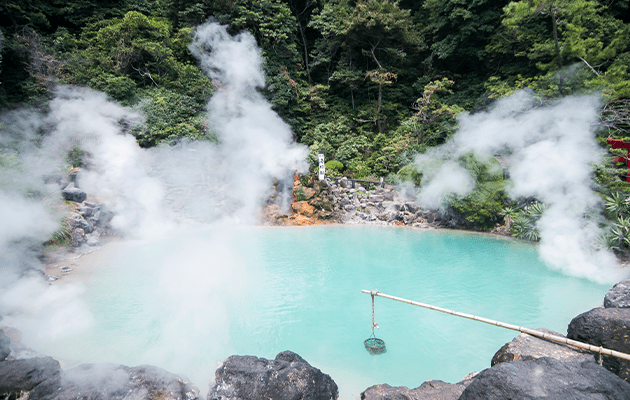 Beppu hot springs is a popular Japanese hot spring city. The hot fumes and water gushing from the hot springs are compared to hell and the course takes in seven of these "hells," each with different colors and shapes. The course takes about 3 hours, and visitors are recommended to refer to pamphlets available locally to check details such as the best order to travel around the springs. 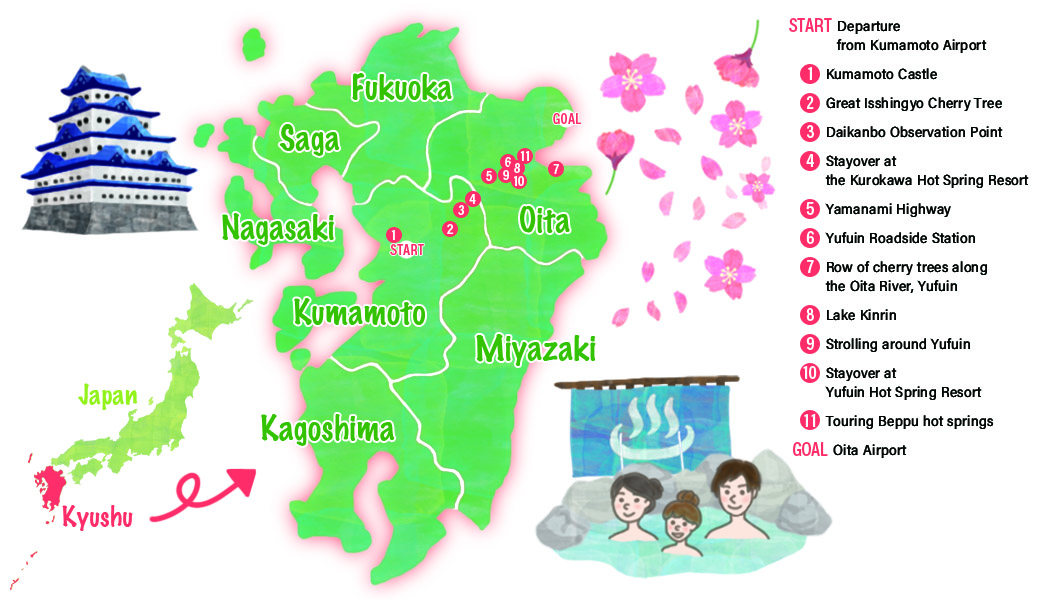 Details such as times required are rough guides. Please be sure to check map codes of destinations before setting out. The site accepts no responsibility whatsoever for any disadvantages or damages arising from use of the site